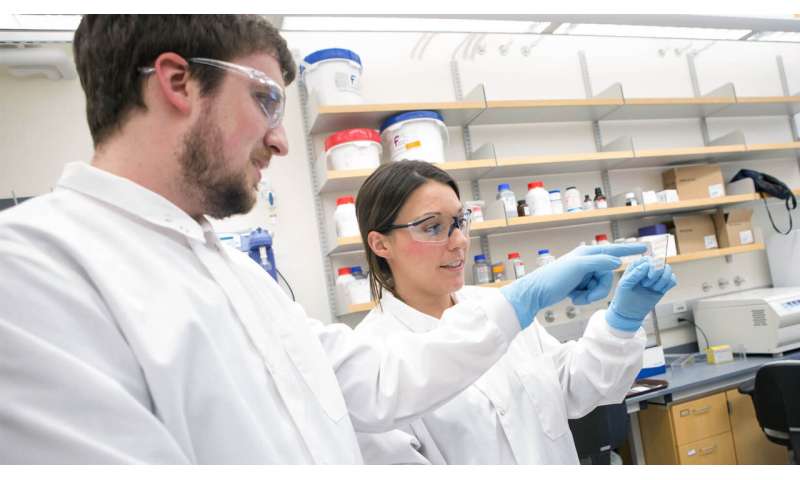 A gene known for helping facilitate communication between neurons in the nervous system has been discovered to be connected with Alzheimer’s dementia and cognitive decline, according to a national research team led by The Jackson Laboratory and University of Maine.

Catherine Kaczorowski, associate professor and Evnin family chair in Alzheimer’s research at The Jackson Laboratory (JAX), and adjunct professor with the UMaine Graduate School of Biomedical Science and Engineering (GSBSE), spearheaded a study to pinpoint the genetic mechanisms that affect resistance or vulnerability to weakening cognition and dementias, such as Alzheimer’s.

Andrew Ouellette, a Ph.D student at JAX and a GSBSE NIH T32 predoctoral awardee, led the project, along with his mentor Kaczorowski and scientists from across the U.S.

By studying the memory and brain tissue from a large group of genetically diverse mice, the team found that the expression of the gene Dlgap2 is associated with the degree of memory loss in mice and risk for Alzheimer’s dementia in humans. Further research will ascertain how the gene influences dementia and mental function.

Dlgap2, located in the synapses of neurons, serves to anchor critical receptors for signals between neurons required for learning and memory. When studying post-mortem human brain tissue, the team discovered low levels of Dlgap2 in people experiencing “poorer cognitive health” and “faster cognitive decline” prior to death, according to researchers.

The team’s findings were published in the journal Cell Reports.

“The reason why this is so important is because a lot of research around cognitive aging and Alzheimer’s has been hyper-focused on well-known risk genes like APOE and brain pathologies,” Kaczorowski says. “We wanted to give ourselves the option of looking at new things people keep ignoring because they’ve never heard about a gene before.”

The study serves as a springboard for additional research into Dlgap2. Ouellette will explore how it influences cognition and how it can be used in therapeutic treatment for memory loss, in part by manipulating the gene with the editing tool CRISPR. Other members of the Kaczorowski lab are studying how to regulate Dlgap2 with pharmaceuticals to help prevent cognitive decline with age.

Scientists relied on Diversity Outbred mice, a population from eight parents created by The Jackson Laboratory to better reflect genetic diversity in humans. The Dlgap2 study involved 437 mice, each one either six, 12 or 18 months old.

“It’s great because you can harness the best parts of a mouse study and human society,” Ouellette says. “Historically, research has been done with inbred mice with similar genetic makeups; same, similar genetic models. But clinically, humans don’t work like that because they’re not genetically identical.”

The team performed quantitative trait loci mapping on the mouse population, examining entire genome sequences to identify genes responsible for varying cognitive function and where they occurred in the sequences. After pinpointing the connection between Dlgap2 and memory decline in mice, researchers evaluated its significance in human mental functionality using genomewide association studies for Alzheimer’s dementia and studying samples of post-mortem brain tissue using imaging, microscopy and other methods.

Kaczorowski says the project relied on information and expertise from all 25 co-authors. For example, Gary Churchill, professor and Karl Gunnar Johansson chair at JAX, Elissa Chesler, professor at JAX, and postdoctoral fellow Niran Hadad provided their expertise in utilizing diversity outbred models and cross-species genomic data integration to the project. Their efforts, she says, emphasizes the importance of teamwork in advancing medical research.

“We’re going to be able to contribute a lot more to human health with team science,” she says.

The GSBSE and The Jackson Laboratory partner to provide cooperative Ph.D. programs that include on-site training at the laboratory in Bar Harbor. The school also partners with other academic and research institutions to provide similar learning experiences. UMaine grants the degrees for these programs.