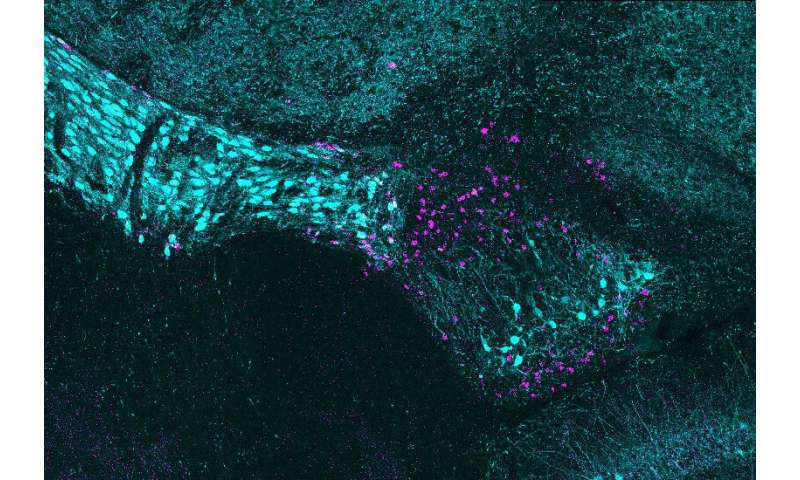 Graduate student Ubadah Sabbagh placed a cold glass slide on the microscope. It was getting late and the lab was quiet. He adjusted a few settings, and traced along the optic tract before zooming in on the brain’s thalamus. What he saw surprised him: two adjacent stripes of glowing spots, each dot denoting a cell body.

At that point, two decades had passed since scientists reported that a small area in the brain’s visual thalamus had unique characteristics that set it apart from nearby regions. Previous studies led by other researchers showed that the region, called the ventral lateral geniculate nucleus, connects to neural circuits involved in regulating circadian rhythm and mood.

But little was known about the region’s cellular architecture—until now.

In a new study published online this week in the Journal of Neurochemistry, Virginia Tech scientists identified more than 40 genes expressed in the vLGN and discovered more than half a dozen brand new neuron subtypes, each expressing unique molecules and clustered in tightly packed striped layers.

“The ‘wow’ moment for me was when Ubadah showed me the image of the two cell subtypes aligning in adjacent layers,” said Michael Fox, the study’s senior author and a professor at the Fralin Biomedical Research Institute at VTC. “It struck us because when we see layered groups of neurons, it usually means that brain area is segregating different types of information. Now we have a more precise tool kit to help us understand what specific cell types in the vLGN do.”

The vLGN spans just a few hundred micrometers in mice and receives signals from the eye via the optic nerve. But unlike some other visual brain regions, it is not associated with classical image-forming.

Neuroscientists initially studied this brain region by destroying its cells and documenting the effects. In the process, however, they also interrupted collateral brain circuits. This led to significant behavioral changes and made it harder to discern which effects were linked to the vLGN. Researchers have since developed more precise, less invasive genetic tools that let them see what happens when a specific cell type’s activity is turned on or off.

Fox wanted to apply these modern techniques to understand the vLGN’s function and downstream connections, but first he needed to determine which cell types to target. Sabbagh, then a second-year graduate student in Virginia Tech’s Translational Biology, Medicine, and Health graduate program, set out to develop an atlas describing the vLGN’s cellular structure as part of his doctoral thesis.

It wasn’t long before they found the first clue that the vLGN might be organized by cell type in segregated layers, which the researchers described in a 2018 study.

In that study, Fox’s team revealed two types of specialized lattice-like structures, called perineuronal nets, that wrapped around distinct types of inhibitory neurons. When the scientists stained these perineuronal nets, they discovered that different populations of neurons covered by these nets were distributed in distinct stripes across the vLGN.

“That was our first hint that there could be layers, but we still needed to identify more cell types to see if they also aligned in non-overlapping domains,” Fox said.

Over the next year, Sabbagh tested roughly 70 different riboprobes to map out the vLGN’s cellular landscape. Riboprobes are segments of ribonucleic acids (RNA) that bind to complementary segments of RNA.

Scientists add fluorescence genes borrowed from other organisms and viruses to the probe, so when a segment of RNA meets its matching sequence, the targeted molecules light up. The researchers combined these tools to visualize cells producing specific genetic molecules in the vLGN, with each molecule glowing in a different color under the microscope.

This method revealed distinct layers on the scans, but the scientists wanted to be sure. Sabbagh coded a computer program to scan pictures of the vLGN and measure probe signals, which verified their findings and showed distinct layers.

But a question lingered: Where were these cells getting their information from?

The researchers used a nonhazardous viral tracing tool to determine which neurons in the vLGN communicated with the neurons lining the eye’s retina. It took a month for the virus to travel a few millimeters between the retina and the thalamus, but it was worth the wait.

The virus revealed that cells in each of the vLGN’s main layers received direct visual signals from retinal neurons in the eye. Next, collaborators at the University of Louisville analyzed the communications properties of those connections. Together, these insights help describe how visual information is processed in the vLGN.

“This is an exciting find. We still have more work to do to fill in gaps, but I expect we’ll find more cell types, and maybe even more layers as we continue to find more biomarkers,” said Fox, who is also a professor in Virginia Tech’s College of Science and was recently named director of the College’s School of Neuroscience.

His team has started analyzing gene expression in individual cells, using a process called single cell RNA sequencing. Fox says that once they know more about specific cell types, they can trace the circuits and begin revealing how the vLGN’s neurons engage with other brain regions.

“We suspect the vLGN has numerous functions, including regulating mood, but now we’ll be able to analyze how specific cell types contribute to those functions with greater precision,” said Sabbagh, who was recently awarded a six-year $390,000 National Institutes of Health award to support his research.