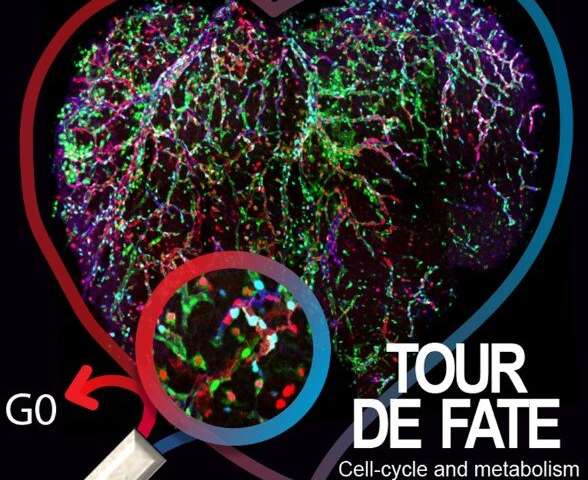 Research carried out by scientists at the Centro Nacional de Investigaciones Cardiovasculares (CNIC) advances the understanding of the biology of blood vessels, and points the way to the design of new therapeutic strategies to induce vascularization and more effective blood perfusion of injured or ischemic tissues.

The study, led by Rui Benedito and published in Nature, reveals a new cellular and molecular mechanism essential for the development of arteries from blood capillaries, a process called arterialization. Activation of this mechanism could improve the recovery of heart function after transient or long term reduction in heart blood flow.

Until now, vascular arterialization was believed to depend on the differentiation and specification of a progenitor cell into an arterial cell, a process thought to require transcriptional activation and DNA remodeling. The new discovery shows that arterialization involves instead the timely suppression of metabolism and the cell cycle, and that this event is both necessary and sufficient to trigger the differentiation and development of arteries.

In the past 20 years, scientists have discovered several cellular and molecular mechanisms that are essential for the formation and differentiation of arteries and veins. The first blood vessels to develop in any growing organ are immature and form an undifferentiated and rudimentary vascular network called a precursor vascular plexus. This network is formed from endothelial cells and is relatively inefficient at transporting blood. It can be likened to a road network built for local traffic but lacking a system of larger connecting highways.

The formation of a hierarchical vascular system composed of larger conduction arteries and veins is therefore essential for the efficient transport of blood to and from tissues. “The incorrect development of this system causes premature embryonic death or potentially fatal diseases linked to vascular malformations that can cause stroke, poor oxygen supply or inadequate tissue perfusion,” explained the study authors.

Initiation of correct arterial specification requires the activation of two genetic pathways: the VEGF and the Notch signaling pathway. “Notch is a molecular signaling pathway that directly regulates the transcription of an immense array of genes that alter a cell’s biology. When Notch is not activated in endothelial cells, arterial specification and development fails, remaining only capillary and venous endothelial cells,” said Rui Benedito.

This led to the view that arteries are built through the induction of a highly conserved, Notch-dependent program of genetic change in a subset of endothelial cells. This genetic program was thought to be essential for the capacity of endothelial cells to differentiate, migrate, and form arteries.

Using sophisticated mouse models, cell imaging and fate mapping tools, Rui Benedito’s group has now discovered that cells with distinct Notch signaling levels are biased towards a particular fate, but not genetically pre-determined, as they can adopt distinct arteriovenous fates if placed in the appropriate biophysical context.

First author Wen Luo found that the main function of VEGF and Notch in arterializing endothelial cells is to inhibit Myc, suppressing its ability to promote cell proliferation and metabolism. The study shows that Myc inhibition is necessary and sufficient to induce an effective bias towards arterialization.

The results also have important implications for the use of drugs to boost angiogenesis in ischemic cardiovascular disease. The study suggests that pro-angiogenic drugs that stimulate general blood vessel proliferation will suppress arterialization. “One of our future goals will be to identify new ways to supress proliferation signals exclusively in pre-arterial cells, thereby promoting effective arterialization without negatively interfering with the induction of capillary angiogenesis,” said Rui Benedito.