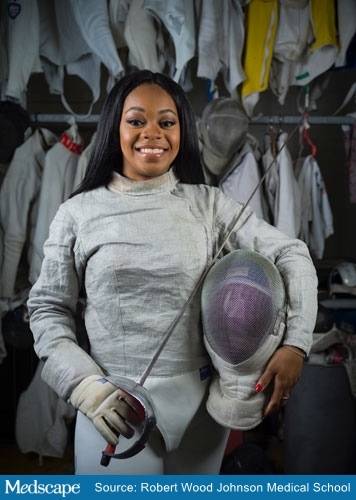 Kamali Thompson, MD, is preparing for residency and the summer Olympics.

Thompson actually chose a scalpel before she picked up a sword. She says she wanted to be a doctor since she was a child but wasn’t introduced to fencing until eighth grade, after she and her mother stumbled upon a demonstration. Up to that point, “my whole future revolved around dance,” she says. Then a fencing coach explained that her dancing footwork would carry over — and that fencing was a major draw for scholarships, especially as a Black person in a mostly White sport. Her mom soon convinced her to sign up.

Their plan worked. Thompson was recruited to join Temple University’s fencing team, where she placed into the honors program with an academic scholarship. In 2012, she graduated at the age of 20 and immediately matriculated into Rutgers Robert Wood Johnson Medical School, in New Brunswick, New Jersey. By the end of her second year, in 2014, she had fenced her way to twelfth place among women fencers in the United States.

Her studies and training take up nearly all of her time. “I hardly ever see my friends. When I first started competing in med school, I missed out on everything, and it really tore me up. I had the worst case of Fomo,” Thompson wrote in her blog, Saber & a Stethoscope. The title comes from saber, the style of fencing that Thompson participates in, which is based on medieval sword fighting on cavalry.

Getting her MD took 9 years. Throughout, Thompson took time off to train for the Olympics. She also racked up an MBA degree and started a small business along the way. “It was a lot of fun, honestly,” Thompson says of her seemingly impossible schedule.

Now, with one foot in residency and her eyes on the games in Tokyo, she is steadily moving toward a future she has long imagined. “In order to truly reach your dreams you have to focus on the necessary activities and cut out everything else,” she says.

During Thompson’s first 2 years of medical school, from 2012 to 2014, she competed internationally. Her goal was to become one of the top four female fencers in the United States — the ranking needed to qualify for the 2016 Olympic Games.

“Scheduling is THE most important thing I do to make my lifestyle work,” she explained in her blog. Each day, she woke at 6:00 AM, worked out for at least an hour, attended class from 9:00 AM to noon, and then studied for 3 hours. Next, she ran to her car, drove to the train station, and studied more on the 45-minute trip to New York for fencing practice. She trained with her saber for 4 hours, got home around 11:00 PM, and she studied until 2:00 AM. Then she’d do it all again the next day. 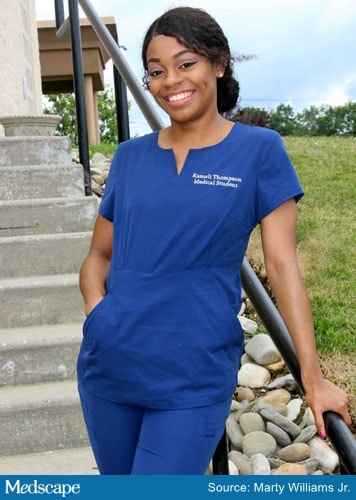 Supportive friends and professors made her balancing act possible. Her friends often worked around her schedule, studying as a group late into the night. World Cup fencing competitions often overlapped with her exams, so her professors let her test early. “They were really supportive. And I think that’s what helped more than anything else,” she says.

Thompson believes that fencing made her a better medical student. Her time travelling internationally for competitions introduced her to people from all walks of life, which she says now helps her be empathetic to patients. And because fencing is so fast — untrained spectators may not be able to follow the movement of the swords — she has honed her focus, which is crucial to performing surgery.

“You have to adjust extremely quickly and do your plan B, C, and D as perfectly as possible,” she says. “Surgery is kind of the same thing. When you’re cutting somebody open, you have to be focused on every single thing that you’re doing, and you have to know why you’re doing it. Execution has to be precise.”

The competition for Thompson’s attention did take a toll on her studies. She took a break from medical education after her second year because she knew she wouldn’t be able to put in the amount of training needed to make it to the Olympics during clinical rotations. Instead, she enrolled in a dual-degree program at Rutgers Business School to earn her MBA during the 2014–2015 academic year.

In 2015 — the year before the past summer Olympics — Thompson put her education completely on hold to focus on the sword. Her preparation didn’t pan out: She finished sixth in the country, two spots away from becoming an Olympian.

The following year, Thompson’s transition back to medical school was rocky. For the first month or so, she struggled with information recall. Although she eventually adjusted, she worried that her fencing training was preventing her from keeping up with other doctors in training. They had more time to study than she did. It also didn’t help that she is a first-generation doctor with no mentors to guide her. “I was at a significant disadvantage,” she wrote in her blog. “As a result, ten-foot tall obstacles I encountered seemed like speed bumps to my classmates.”

Despite these challenges, this March, Thompson matched into the highly competitive residency of orthopedic surgery.

Injuries Spark a Love of Orthopedics

Ever since she was a child, Thompson wanted to be a pediatrician. She remembers loving to go in for routine check-ups and was disappointed when she had finished receiving her required vaccines. An unexpected incident changed her lifelong plans.

Right before medical school, Thompson broke her thumb while fencing. The 2016 Olympics were still 4 years away, but she worried that her injury would push back her training. Her doctor didn’t understand her concern. This frustrated her to no end. That was when she determined that sports medicine would be a good fit for her.

“As an athlete, if I was working with other athletes, I might be more sympathetic to what they’re going through,” she realized. She decided to specialize in pediatric sports medicine. That decision didn’t last long. During her third-year rotations, Thompson scheduled surgery first to “get it over with.” To her surprise, she enjoyed it.

She signed up for an orthopedic surgery elective. “After one day, I was completely hooked,” she says, adding that the specialty is perfect for her because it’s so hands-on. She often holds limbs steady during surgery or has to use a mallet to shift bones back in place. 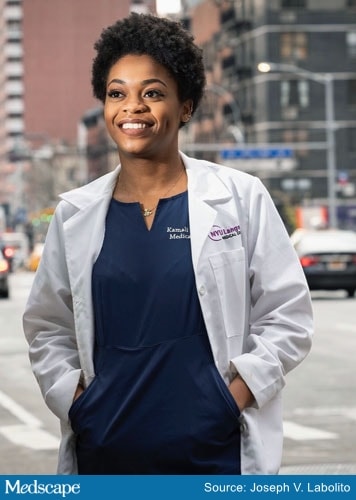 Thompson is excited for the next stage in her career.

To boost her resume before applying for residency, Thompson took another break from school to perform 2 years of research at New York University, from 2017 to 2019. “It was so great because they gave me a lot of initiative,” she says. “I had a lot of autonomy.”

She worked on several research projects, including a study of lower limb injuries to determine which are most common in each of the three styles of fencing: saber, epee, and foil. “A lot of my teammates have been injured, but there was no study done looking at what everybody has,” she says. She hopes that her study will help her fellow fencers avoid the most common injuries.

A Second Shot at Olympic Glory

After her research years, Thompson took the 2019–2020 school year off to train for the 2020 Olympics, which were ultimately canceled because of the COVID-19 pandemic. She returned for the 2020–2021 school year to complete her medical studies while competing for a spot at the rescheduled Tokyo Games. Several tournaments were canceled, which limited her opportunities to move up in the rankings. This time, she finished in fifth place, the first-alternate position.

“It’s really heartbreaking,” Thompson says. “I’ve dedicated a lot of time and effort and sacrifice and made a lot of decisions about my life to be on the Olympic team. When you work so hard to control everything that you can control and then there’s a pandemic…it’s unfortunate.”

Although she didn’t secure a spot on the first team, Thompson is still headed to Tokyo. If one of her teammates can’t compete, she will fence in their place. Alternates don’t usually travel to the Games, but this year is different. One of her teammates could test positive for or be exposed to COVID-19 at the last minute.

Thompson is glad she will be in Tokyo for another big reason: to cheer on her younger brother, Khalil. When she started training in high school, her mother traveled with her to frequent fencing practices in New York. Khalil was always dragged along, so he eventually decided to pick up a sword himself. With skill comparable to his sister’s, he secured a place on the US men’s Olympics fencing team. She couldn’t be prouder. “I feel like a part of me still made it because he made it,” Thompson says.

From Blog to Business

Besides being a newly minted doctor and Olympic-level fencer, Thompson is also a small business owner. While working toward her MBA, she started Saber & a Stethoscope. She wanted to share her first real taste of working in medicine through the blog by recommending what she found useful. As she wrote in one post, “Instead of wasting a rotation figuring out the right study materials, just scroll down. I got you ;).”

Recently, the blog became a business. Thompson has released merchandise for purchase: T-shirts and mugs with one of three logos that celebrate her love for both fencing and surgery. Within the next 5 to 7 years, she hopes to launch in-person workshops on how to balance being a medical student with maintaining your health.

Thompson will soon start her residency at Temple. After the Olympics, she expects to have much less time for fencing, but she refuses to give up the sport entirely. She says it will help her maintain a healthy work-life balance. Whether she will retire to recreational fencing or keep trying to make the Olympic team remains to be seen. And who knows, maybe she’ll be called on to pick up her saber in Tokyo later this summer.

Tara Santora is a freelance science journalist based out of Aurora, Colorado. They are a Contributing Editor at Fatherly and have written for Scientific American, Undark, Business Insider, Psychology Today, and many more. Follow them on Twitter at @Tara_Santora.