The glory of tissue expansion technologies is that when structures, such as proteins that build nerve cell connections, are too small for a microscope to resolve, clever chemistry can make everything bigger and easier to see. But sometimes the chemical bonds involved form right where fluorescent antibody labels must attach to proteins to make them visible. Now a team of MIT researchers has solved the problem, demonstrating vast improvements in imaging the structure of neural connections with standard confocal microscopes.

The upgrade is implemented in “eMAP,” a new and improved version of the “magnified analysis of proteome,” or MAP, technology introduced in 2016 by the lab of Associate Professor Kwanghun Chung. The “e” stands for epitope-preserving, meaning that the binding sites for fluorescent antibody labels are much less likely to be blocked. In a recent paper in Science Advances, Chung and co-authors show that with eMAP, many proteins at neural connections, or “synapses,” can now be imaged when they could not before.

“eMAP preserves the fine-scale molecular architecture of synapses and can facilitate high-throughput analysis of macromolecular assemblies with its exceptional compatibility with the large library of off-the-the-shelf antibodies,” report the scientists, including lead authors Joha Park, Sarim Khan and Dae Hee Yun. They work with Chung in his labs spanning The Picower Institute for Learning and Memory, the Institute for Medical Engineering and Science, and MIT’s Departments of Chemical Engineering and Brain and Cognitive Sciences (BCS).

Tissue expansion technologies work by infusing an acrylamide mesh into tissues to anchor all the proteins so that when the mesh is expanded, they all expand with it but stay in the same place relative to each other. The technologies typically accomplish that anchoring with chemical bonds of the fixative formaldehyde. The team’s key advance with eMAP was reconfiguring the method to dispense with those chemical bonds in favor of weaving the mesh so finely, with more acrylamide, that proteins would just become physically entangled with it. That left the precious epitopes on the proteins more open for bonding by fluorescent antibody labels.

“One of the discoveries that we made is that hydrogel components did not need to be introduced during the perfusion step when formaldehyde was present, as it was in the original realization of MAP, to achieve robust tissue expansion,” Yun said.

Park further explained: “By removing formaldehyde before adding the MAP solution, we could prevent the chemical cross-linking between proteins and the hydrogel mesh; we could find an optimal condition that could permanently anchor the biomolecules while allowing antibodies to diffuse very deep inside tissue.”

In testing they found that among synaptic proteins, 49 out of 51 antibody labels could now attach with eMAP whereas only 35 could with MAP. 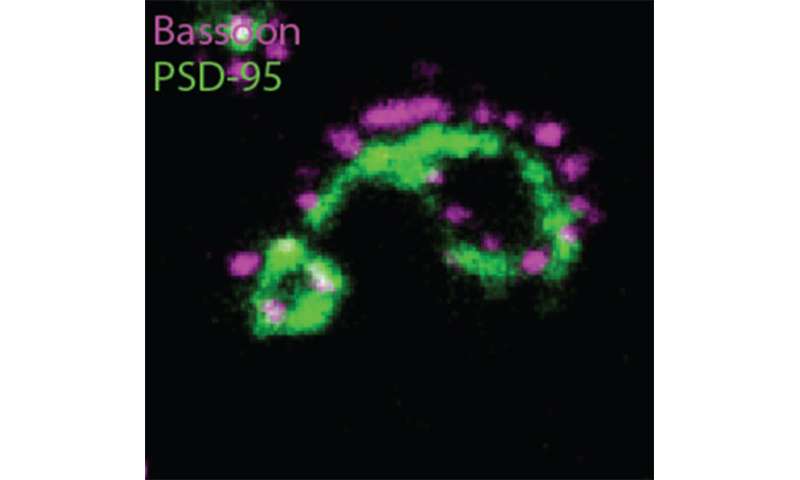 The collaborations produced vibrant images, without the need for any amplification, of previously excluded proteins, like Bassoon and Piccolo, or ones that barely showed up before, like Homer1. The images clearly showed exactly how the proteins were arranged within the synapses, enabling measurement of their relative distances from each other, and also their relative abundance.

eMAP also allowed for multiscale imaging of synapses along whole neuronal branches, or dendrites, meaning that it was easy for researchers to not only see inside each metaphorical synapse house but also to zoom out to the whole neighborhood of the entire cell. That’s a big advance for researchers, Nedivi said, because studies of how synapses change deep in the brains of live animals use lower-resolution scopes whose images must typically be validated with higher-resolution methods. Traditionally that has been done with electron microscopes.

“I’d rather not use EM, because its so labor intensive and doesn’t combine well with labeling,” said Nedivi, a member of The Picower Institute and MIT’s Departments of Biology and BCS. “Kwanghun’s method offers the opportunity to get that same kind of resolution but also to image across a much bigger sample size per cell.”

Moreover, the technology allows for multiple rounds of antibody labeling of the same tissue, so scientists can richly label many proteins within the same synapse. Working with Nedivi and Feng’s labs, Chung’s team demonstrated labeling as many as six different proteins across synapses in two different mammal species, showing how they are all arrayed throughout the structures on both sides of the synapse.

Nedivi and Chung’s labs also showed that by labeling components of receptors for the neurotransmitter GABA in inhibitory synapses (so called because they reduce a neuron’s likelihood of producing an electrical signal), they could examine whether they differ. Indeed, they found that a little more than half of inhibitory synapses have both components they looked for, but a quarter had neither and some had only one or the other.