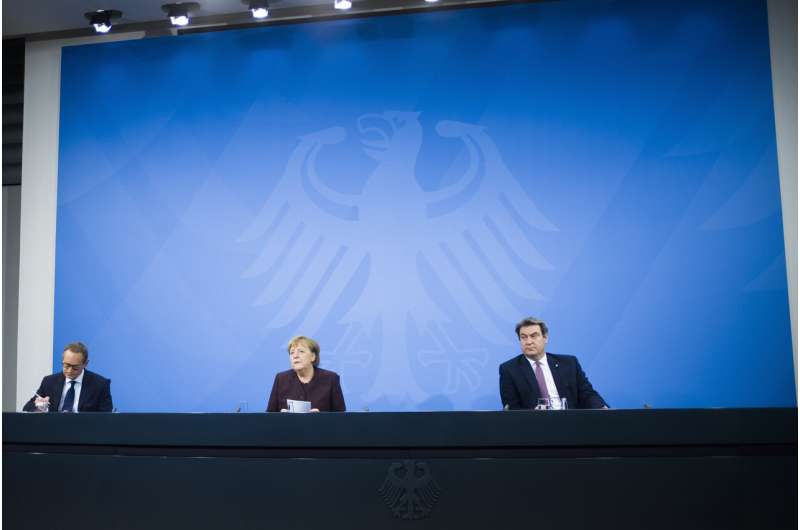 German Chancellor Angela Merkel and the country’s 16 governors decided Wednesday to largely extend the country’s coronavirus lockdown until March 7 amid concern that new virus variants could reverse a decline in new confirmed cases.

According to their agreement, many facets of the current lockdown, which were due to expire on Feb. 14, will be extended but there will be some exceptions made—including allowing hairdressers to reopen their businesses on March 1, albeit with strict hygiene regulations.

Germany’s second lockdown began in November and was extended and toughened before Christmas due to concern that the number of COVID-19 patients could overwhelm hospitals.

With the extension, bars, restaurants and most stores will remain closed, among other things.

On Wednesday, Germany’s Robert Koch Institute reported the country had 8,072 new virus cases and 813 deaths in 24 hours. In all, Germany has seen more than 63,000 confirmed virus deaths during the pandemic.

The weekly number of new infections has dropped to 68 per 100,000 inhabitants. The government’s goal is to push the number below 50 to enable reliable contact-tracing. It peaked at nearly 200 just before Christmas.

Merkel noted that the infection rate had dropped from 110 in just over two weeks and added that the government’s key target was “in sight.”

“We can be very satisfied,” said Merkel, expressing thanks to those who had helped drive down numbers by respecting lockdown rules and refraining from travel and unnecessary contacts.

But she warned that the new virus variants posed the risk of a “third wave” that could only be prevented if authorities were able to once again track and trace all new cases.

The reopening of schools has been a major point of contention between the federal and state governments. Several governors have argued for reopening kindergartens and elementary schools first, to relieve parents of the burden of home schooling and make sure that underprivileged children don’t fall too far behind.

In Germany, state governments have extensive powers—including authority over education. However, the country’s strained medical personnel have demanded that the lockdown be extended in its current strict form.

Merkel and the governors agreed that states will be able to gradually open schools provided there are hygiene measures in place to curb the spread of the virus. The government is also looking into the possibility of giving vaccines to kindergarten staff and primary school teachers sooner.

Ahead of the meeting, the head of the German Interdisciplinary Association for Intensive Care and Emergency Medicine, or DIVI, warned that the reopening of schools and kindergartens would lead to virus infections to re-emerge.

“Schools and kindergartens are unfortunately places where the virus is passed on,” DIVI President Gernot Marx told the Rheinische Post daily newspaper. “The kids carry it into the families, and most teachers are not vaccinated. As an intensive care doctor I am therefore telling you: this is irresponsible.”