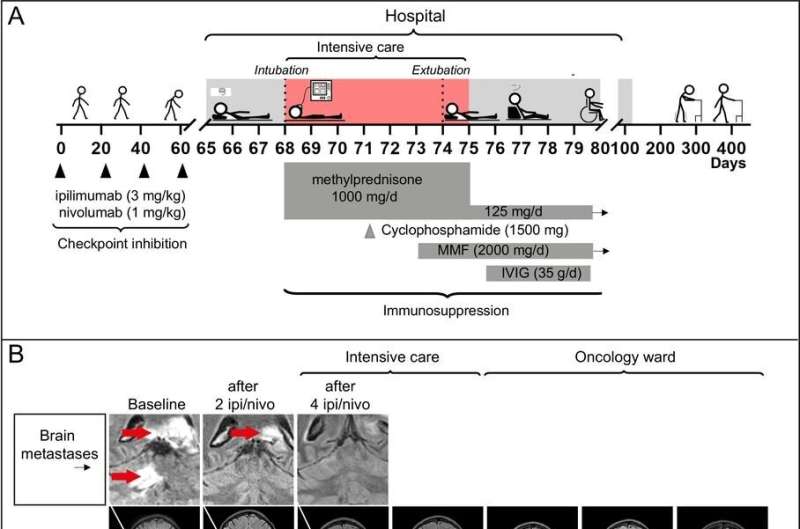 Immunotherapy is very effective for many cancers, but the treatment can also cause autoimmune side effects. Encephalitis is one of the most serious and difficult-to-diagnose side effects of immunotherapy. Now care staff can use a simple blood test to detect treatment-triggered encephalitis at an early stage. This finding is reported in a study by researchers at the University of Gothenburg. The study also provides new clues to the seriousness of side effects from immunotherapy.

Immunotherapy with checkpoint inhibitors has enabled completely new opportunities for oncologists to treat patients with various forms of cancer. The treatment means that the patient’s own immune response attacks the cancer cells. The drugs activate the immune response by blocking signaling pathways that normally act as inhibitors of the patient’s T cells. With the treatment, many patients with widespread malignant melanoma, for example, can become tumor free, or even cured, but autoimmune side effects are common and sometimes very serious.

“It is now possible for patients with metastases in the brain to become completely tumor-free, which is fantastic. In some patients, however, the activation of the immune response becomes so extreme that even healthy tissue becomes severely inflamed,” says the study’s first author Sara Bjursten, who is a doctoral student at Sahlgrenska Academy at the University of Gothenburg and a specialist in oncology at Sahlgrenska University Hospital.

The study was recently published in the Journal of ImmunoTherapy of Cancer and is the result of a collaboration between researchers in oncology, rheumatology and clinical neurochemistry in Gothenburg.

“We show that simple blood tests, several already established as routine tests, can likely be used to see early on which patients are developing severe encephalitis. This offers a better opportunity to adapt the treatment and to administer anti-inflammatory drugs in time.”

The first part of the study is a case study showing that the marker S-100B in blood samples can act as an early warning for encephalitis during immunotherapy. The levels of S-100B in blood rose even before the encephalitis gave symptoms. When diagnosing the encephalitis, newer markers were analyzed, such as GFAP and NFL. These markers had shot up and then decreased in parallel with clinical improvement.

The researchers believe that these simple blood tests can be key in diagnosing treatment-triggered encephalitis, which today is difficult to diagnose because the symptoms can be misinterpreted as tumor growth, stroke or infection.

“In Gothenburg, we now use S-100B and NFL to monitor the risk of encephalitis and we hope to soon be able to include GFAP and Tau. The markers have helped us diagnose three more cases of treatment-triggered encephalitis,” says the study’s last author Max Levin, who is an associate professor at Sahlgrenska Academy at the University of Gothenburg and chief physician in oncology at Sahlgrenska University Hospital.

Free of tumors with immunotherapy

The patient case that sparked the researchers’ interest was a man who was treated at Sahlgrenska University Hospital a few years ago, where malignant melanoma had spread to the brain with

metastases. His brain metastases shrank sharply from the combination treatment he received, but he also developed such severe encephalitis that he became paralyzed and almost died. Examining his blood tests, the researchers noted the connection between the marker and the encephalitis.

After two years of rehabilitation, the patient was still tumor-free and had learned to walk shorter distances again.

“It is an interesting finding. No specific property of T cells has previously been demonstrated in adverse reactions. The analyses we developed together with Professor Anna Rudin include a battery of activating and inhibitory T cell receptors. ICOS was the receptor that stood out strikingly in patients with serious side effects. It is possible that pharmacological blocking of ICOS is an effective way to stop encephalitis and other life-threatening side effects,” according to Max Levin.

Could have important implications