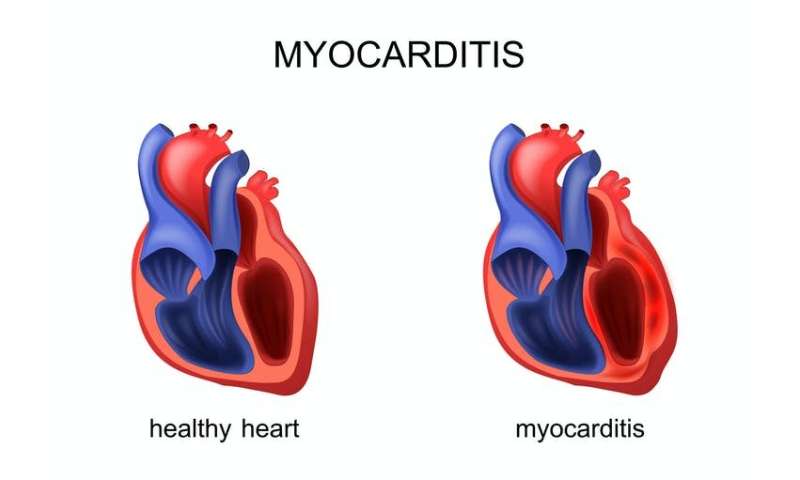 People with the most severe forms of COVID-19 are often older and have existing health problems. About 10% of COVID-19 patients have … high blood pressure. Yet surprisingly, people with lung disease, such as asthma and chronic obstructive pulmonary disease (COPD) account for only 6% of severe COVID-19 cases. These statistics are similar in patient reports from China, Italy,the UK and the US.

People with existing heart disease are worse affected by COVID-19, but the virus can also affect the heart in people without heart disease.

In both cases, when there is a severe COVID-19 infection, the heart undergoes a massive inflammatory response called myocarditis. The virus infects the cells of the heart causing the muscle tissue (myocardium) to undergo severe inflammation. This can alter the electrical conduction in the heart, affecting its ability to pump blood around the body. The result of which is less oxygen getting to organs, including the lungs. How this happens is unclear, but there are several possible mechanisms.

First, heart damage may be associated with the way the virus enters the cells. A spike-shaped protein on the surface of the virus locks on to a receptor on the cell surface called ACE2. In patients with underlying heart disease, there are a greater number of ACE2 receptors on the cell surface, which may result in a greater number of virus particles entering the cell causing significantly more inflammation than in people without heart disease.

Second, as with any infection, the body mounts a war against the invading pathogen. This requires more energy and an increased metabolism to fight a systemic viral infection, which is why our temperature goes up during an infection.

The immune system in a relatively healthy person is able to mount an adequate response to the infection and produce antibodies to combat the virus. People with much weaker immune systems, such as the elderly or those with underlying health problems, cannot sufficiently mount this response and fight the viral infection. The infection rages in the body and attacks vital organs especially the lungs and the heart.

Doctors are able to monitor the severity of the myocarditis using a blood test called troponin. This protein is usually found in the heart. It is released into the bloodstream when there is significant heart injury, such as during a heart attack.

Patients in Wuhan who were severely ill were more likely to have a greater concentration of troponin in their bloodstream than those less severely infected. This is also repeated in data from the Italian outbreak.

The rapid inflammatory response to the virus in fulminant myocarditis is thought to be due to chemical signal burst called a cytokine storm. Cytokines are chemical messengers that are released from immune cells. They attract a great number of the inflammatory cells called T-helper cells to the site of infection.

When patients undergo a cytokine storm there is an unregulated response causing excessive inflammation, which can kill the patient. These patients not only have increased troponin but also increased concentrations of inflammatory markers showing signs of significant viral infection. Drugs to help control the immune system may be of use in controlling the sudden inflammatory response and trials are underway in COVID-19 patients.

Many viral diseases put such a huge strain on the body that the heart often cannot cope so more people die from heart problems than they do from the lung disease. COVID-19 is, in fact, similar to other respiratory pandemics. In 2009 there was a flu pandemic caused by the H1N1 virus—the so-called swine flu pandemic. Patients infected with H1N1 had a greater number of heart-related complications than is normally seen in typical seasonal flu infections with 62% demonstrating fulminant myocarditis.