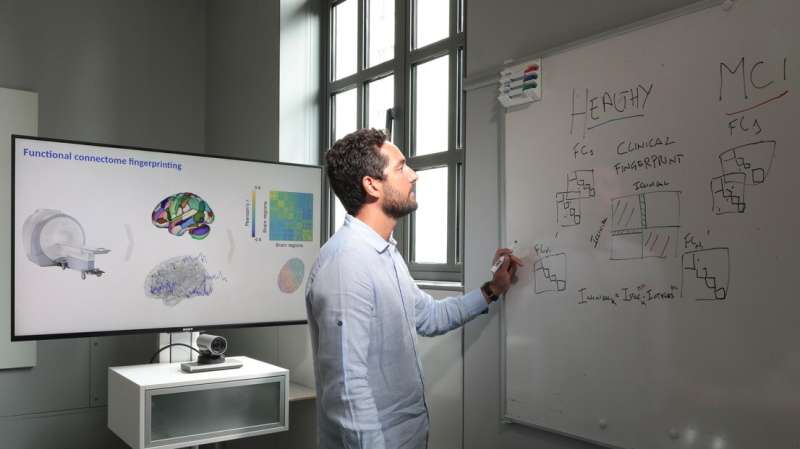 An EPFL scientist has found that brain fingerprints—or maps of the neural connections within our brain—can be used to detect a decline in cognitive ability. That’s because the fingerprints are harder to detect in people who already have mild cognitive impairment.

Just like our fingertips, our brains contain an embedded pattern that’s different for every individual. Thanks to advancements in neuroimaging, scientists have found over the past few years that our cerebral activity creates networks of neural connections that are unique to each one of us. However, researchers are still in the process of exploring how these brain fingerprints can be used and what information they can reveal to doctors—especially for diagnosing neurological disease.

Dr. Enrico Amico, a scientist and SNSF Ambizione Fellow at EPFL’s Center for Neuroprosthetics and EPFL’s Medical Image Processing Lab, along with colleagues at Parthenope University in Naples and Aix-Marseilles University, have identified a possible initial clinical application for the brain fingerprints for the first time. They studied the brain activity of two groups of people: one consisting of patients with mild cognitive impairment—i.e., people with memory problems but who have not yet reached the stage of dementia—and a control group of healthy subjects. The scientists found that the brain fingerprints of the symptomatic patients were much less easily identifiable than those of the healthy group.

The images were obtained by recording the electromagnetic activity of the participants’ brains, which is done by measuring the magnetic fields generated by their neurons. “That gave us a kind of snapshot of their brain activity,” says Dr. Amico.

Images were taken twice for each participant, at one-minute intervals. In the healthy group, the brain fingerprints were unique, in that the scientists could correctly identify the corresponding individual nearly 100% of the time. But for the group of patients, the fingerprints were much harder to recognize and the scientists struggled to identify the individuals with certainty.

The study also found that participants whose brain fingerprints were less easily identifiable were also those who scored lower on the Mini Mental State Examination (MMSE) – a test that’s widely used to conduct clinical evaluations of the cognitive function of patients with preliminary signs of dementia.