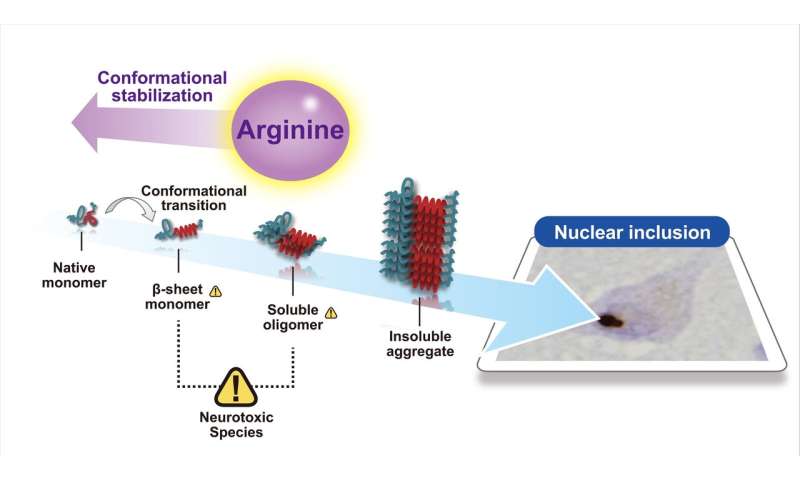 Familial spinocerebellar ataxia (SCA), Huntington disease, and spinal and bulbar muscular atrophy are inherited neurodegenerative diseases. Because of their similar molecular pathogenesis, they are also called polyglutamine (polyQ) diseases. Current treatments for these diseases only focus on symptomatic improvement, as disease-modifying approaches have remained an unmet clinical need. Now, researchers from Osaka University, National Center of Neurology and Psychiatry, and Niigata University have identified the natural amino acid arginine as a novel potential approach to attenuate symptoms, as well as the molecular pathogenesis of polyQ diseases. In a new study published in Brain, they show how arginine improved neurological symptoms when given to mice with polyQ diseases before and even after the onset of symptoms.

PolyQ diseases are caused by an abnormal expansion of a specific DNA sequence consisting of the three bases: cytosine, adenine and guanine (CAG). In certain genes that are important for normal neuronal function, CAG can appear back to back multiple times. The number of CAG repetitions varies between individuals and different neuronal genes, but if the repetition happens too often, the function of the protein that is built from the gene can be severely impaired. While an increased number of CAG repeats results in protein misfolding and aggregation with concurrent damage to nerve cells, medication that actually halts this process of neurodegeneration has yet to be developed.

To achieve their goal, the researchers turned to chemical chaperones, molecules that facilitate proper protein folding, to prevent the build-up of protein aggregates. By screening a number of chemical chaperones for their ability to prevent protein aggregation in a test tube, they discovered that arginine, a naturally occurring amino acid, had the strongest inhibiting effect on protein aggregation. In a separate set of experiments using living cells, the researchers then found that arginine was also able to prevent aggregate formation of polyQ proteins. 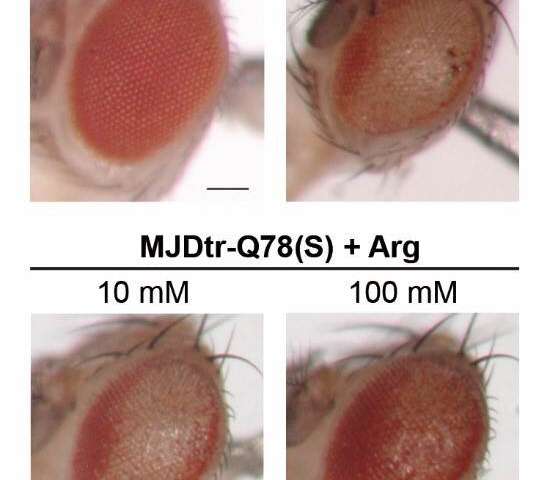 “These findings show how arginine could alleviate the detrimental effects of polyQ aggregate formation,” says lead author of the study Eiko Minakawa. “We next wanted to know if arginine could slow down or halt the progression of different polyQ diseases in living organisms.”

To test the therapeutic potential of arginine, the researchers utilized well-established mouse models of familial spinocerebellar ataxia, and spinal and bulbar muscular atrophy. When added to their drinking water before symptom onset, arginine inhibited polyQ protein aggregation as well as suppressed motor impairment and neurodegeneration of the mice. Intriguingly, even after the onset of neurological symptoms, arginine was able to ameliorate the detrimental effects of familial spinocerebellar ataxia.