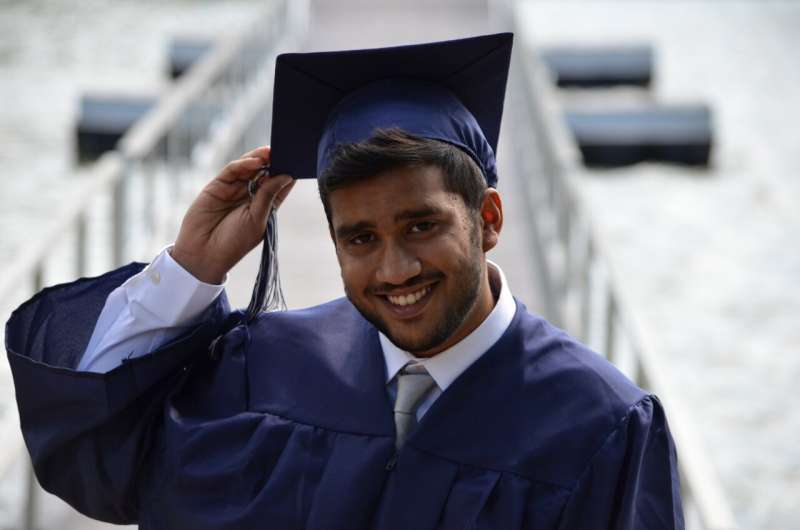 Write down the benefits of obtaining a college degree, and more than likely, all the items on the completed list will relate to graduates: Higher salaries, autonomous jobs and better access to health care, for instance. All of those factors, supported by extensive research, help draw a direct line connecting higher education and health. Similar research suggests how the education of parents affects their children.

Now, two University at Buffalo sociologists have used a new wave of data from a survey launched in 1994 to further extend the geometry linking educational attainment and health that demonstrates another dimension of the intergenerational effects of completing college. Their findings, published recently in the Journal of Gerontology: Social Sciences, suggest that adult children’s educational attainment has an impact on their parents’ mental and physical health.

“By analyzing these data, we arrived at the conclusion that it was detrimental to parents’ self-reported health and depressive symptoms if none of their children completed college,” says Christopher Dennison, Ph.D., assistant professor of sociology in UB’s College of Arts and Sciences, and a co-author of the paper with UB colleague Kristen Schultz Lee, Ph.D., an associate professor in the Department of Sociology. “The negative mental health outcome of the parents was in fact our strongest finding.”

Dennison and Lee have both used the National Longitudinal Study of Adolescent to Adult Health (Add Health) in their previous research. Add Health is a nationally representative longitudinal study of over 20,000 adolescents. It is the largest such survey of its kind. There was an initial wave of data on the parents (ages 30-60) when the survey began and another wave of data from roughly 2,000 of those original participants (now ages 50-80) gathered from 2015-17.

It’s this latter data set that provided the researchers an opportunity to look at the intergenerational relationship between parents and children over time, while statistically balancing factors that could influence an aging parent’s health.

“These results are particularly important in light of growing educational inequalities in the U.S. in the last several decades,” says Lee. “We know how our own education impacts our own health; we know how parents’ education impacts their children in many different ways; now we’re trying to add to that understanding by explaining how children’s education can have an impact on their parents.

“One thing I thought particularly interesting about these findings is that those parents who are the least likely to have a child attain a college education (low socioeconomic status) seem to benefit the most from a child having a college degree.”

Dennison and Lee speculate on a number of elements that might be driving this association, including anxiety, assistance and lifestyle.

“Parents whose children have lower levels of education might spend more time worrying about their children. That has negative implications for their mental health and their self-rated health,” says Lee. “Kids without a degree might need more help from their parents and are also less able to provide help if needed in return.

“Another possibility is that educated children might be doing a better job of helping their parents live healthier lives by encouraging exercise and a sensible diet.”

What’s clear is the evidence pointing to how the benefits of a college degree show up in the parents’ health later in life.

“In this era when a college degree is of ever-growing importance, we see how the long-term investment in education is advantageous to the adult child’s health, but also has benefits down the road for their parents too,” says Dennison.

And it’s this idea of an investment that speaks to how educational attainment reaches across generations from a policy perspective.