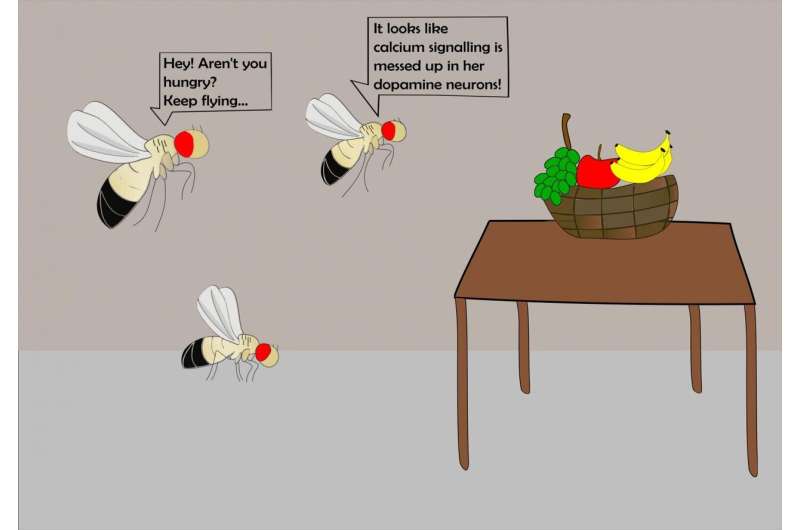 “A journey of a thousand miles begins with a single step” is a popular adage that talks about the initial thrust required to embark on a task. However, once begun, how do we persevere on the job and not let it fall apart like a New Year resolution? How do we stay motivated?

Well, these are not just philosophical deliberations, but compelling science projects for neuroscience aficionados. Scientists have in fact been on the lookout for the neuronal and molecular players which are at the root of governing motivation.

Here is a research story from the generous fruit fly that identifies the machinery behind the fly’s relentless flying pursuits.

Prof. Gaiti Hasan’s group, in a recent study, has discovered that the ability of flies to sustain flight for long periods of time is driven by a surge of calcium in select neurons of the brain that make the ‘happy’ chemical messenger, dopamine. At the forefront of this neuronal activity is an esteemed calcium channel protein called IP3 receptor (IP3R) which orchestrates the calcium gush in these dopaminergic neurons. Interestingly, they found that in addition to modulating the long flight voyages, the same troupe of neurons and molecules motivate hungry flies to actively seek food. The team hypothesizes that having a single neuronal framework to modulate both these crucial behaviors could help the fly traverse longer distances in search of food.

“Flight is an innate behavior of flies. Even though the neuronal circuit that pilots flight behavior is hard-wired, we show here that it still needs to be fine-tuned by cellular calcium—especially calcium mobilized by the IP3R. Such modulation ensures that the fly’s internal metabolic state and its response to external cues are balanced,” explains Gaiti, whose lab has been working with the fly IP3R for several years now.

The IP3R is lodged within the cell’s industrial highway—the endoplasmic reticulum. It translates extracellular messages into intracellular responses by opening the gates of calcium. These calcium spikes pivot neurons from silent to active states, which in turn drive behavior.

In flies, the most striking behavior regulated by the IP3R is maintenance of flight. This provided a nice window of opportunity to explore the biology behind sustaining flight—a motor behavior that likely requires motivation. So, the researchers decided to track the cells that require IP3R function for flight and find out how they do it.

In pursuit of these answers, Anamika (graduate student and lead author) engineered a functionally frail version of the IP3 receptor (IP3RDN) which could override the activity of the normal copy (IP3R). When introduced into fly neurons, this genetic variant of the protein markedly dampened the calcium response. At the behavioral level, when IP3RDN was expressed in a just a few neurons of the fly brain, the flies faced a huge flight disadvantage; their flight times plummeted to just 1/3rd that of IP3RDN-free wild-type siblings.

What is the neuronal signature of these neurons?

Well, by tapping into an array of genetic tools available in flies, Anamika found that 2 pairs of dopamine producing neurons were controlling such sustained flight—that’s just 4 neurons out of more than 25,000 neurons in the fly brain!

Having solved the ‘where’ part of the puzzle, the team went on to put together the ‘how.” For this, Anamika used imaging techniques that use protein sensors to reflect neuronal activity. She noticed that by virtue of its central role in calcium signaling, the IP3R also holds the reins on neurotransmitter release—a trademark of neuron activation and communication.

But here is a nice turning point in the story.

To find out, she took flies expressing IP3RDN in the flight-regulating dopaminergic neurons and starved them for a few hours. Then, she let them into a chamber that contained a drop of their favorite food and watched them closely. But these hungry flies showed no enthusiasm to forage for food, confirming that the IP3R was controlling food seeking behavior as well.

So, how does this calcium channel affect foraging behavior?

“Well, the IP3R functions like a rheostat—increasing or decreasing calcium in select dopamine neurons. This depends on integrating food cues from the environment and the internal metabolic state of the fly,” explains Gaiti.