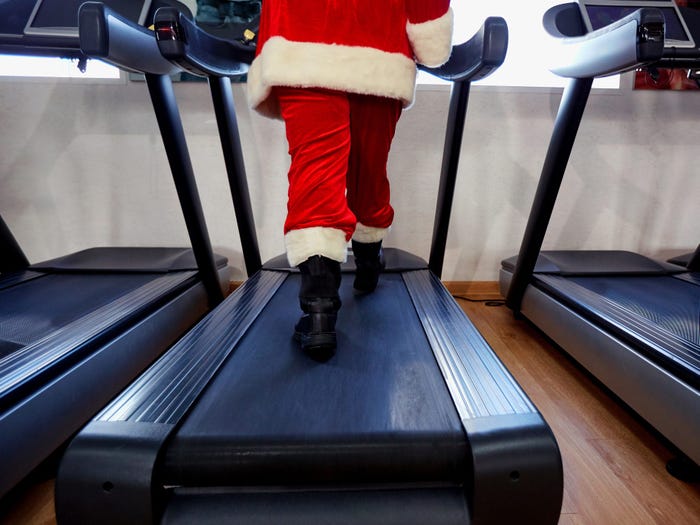 A British fitness magazine apologized after posting a tweet encouraging people to "burn off those Christmas calories" with exercise.

On December 27, Women's Fitness tweeted: "Are you getting out for a run, walk or cycle today? It's a great day to burn off those Christmas calories… post your pics here!"

But the suggestion that exercise should be about "burning off" food was met with a strong backlash.

She wrote: "We shouldn't be ascribing moral labels to food and exercise or encouraging people to adopt an earn and burn mentality; it's the fall out from these damaging marketing campaigns that I see only too well in clinic.

"As a mainstream fitness magazine, why not use the opportunity to promote the positive mental and physical health benefits to be gained from going outdoors/ exercise; improved mood, better sleep, more energy etc. Disappointing."

The magazine replied to Vohra's tweet saying: "Sorry to hear you've seen some distressing examples of food issues. We weren't saying people had to burn off calories.

"The reality is that some people will have eaten more than usual and may be feeling that they want to do something about it. Or some people may feel OK with it."

Other health and fitness professionals also condemned the magazine's stance.

"Exercise is a celebration of what your body can do, not a punishment for what you ate!" registered nutritionist Rhiannon Lambert tweeted.

On December 28, the magazine tweeted an apology.

"Sorry to anyone upset by our recent post about getting out and burning off Xmas calories," the tweet read. "We were trying to encourage you to exercise, share your pics and to not to wait until January if you have fitness or weight-loss goals. We know that not everyone exercises for weight loss."

Most qualified health professionals are anti the notion that exercise should be about offsetting food.

Izy George, a personal trainer and the co-founder of online strength-training studio Grindhouse, told Insider: "We train to strengthen our physical and mental health, weight loss or 'calorie burn' should be considered a subsidiary to these benefits. Exercise is also proven to improve sleep quality, increase energy levels and brain function as well as reducing stress and risk of disease."

Yes, weight loss comes down to being in an energy deficit, but it's generally advised to achieve that through your diet, because formal exercise actually only makes up about 5-10% of your overall daily energy expenditure, personal trainer and nutrition coach Graeme Tomlinson previously told Insider.

Movement is important for health, but a fitness regime is rarely sustainable if your only incentive is "burning off" food — which also encourages food guilt, often leading to a binge and restrict cycle.

A much better approach is to find a form of movement you actually enjoy and set performance-based goals.

Lambert, the nutritionist, told Insider: "Because exercise is too often portrayed as a way to burn off food, it's not seen as an enjoyable part of life and therefore long-term health outcomes aren't often achieved.

"Food and exercise are seen by many as a form of gluttony and punishment respectively — we need to start seeing all food as acceptable, and we'll then have a the healthier relationship we'll have with food in the long-term. Calories aren't that simple, and every body works differently."

Personal trainer Max Lowery previously told Insider he encourages his clients to focus on how exercise makes them feel on the inside: "Once they start to focus on that, they then do feel immediate difference from being active and exercising. And that gives them motivation to continue."

Women's Fitness did not immediately respond to Insider's request for further comment.